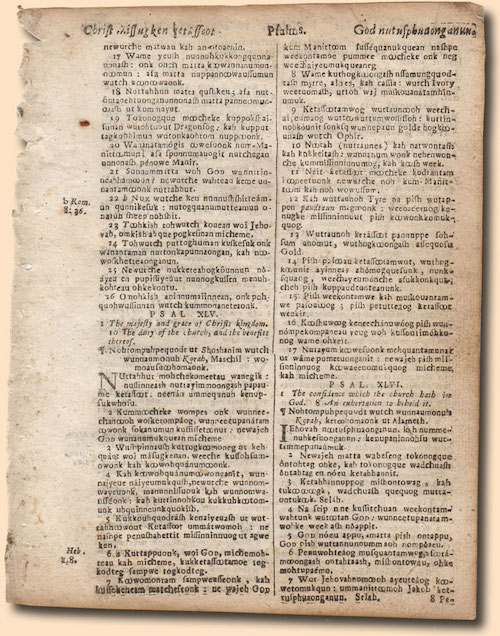 A leaf from John Eliot’s Algonquin (Native American “Indian” language) Bible. These leaves are three-and-a-half centuries old. Many people are shocked to discover that the first Bible printed in America was not English… or any other European language. In fact, English and European language Bibles would not be printed in America until a century later! Eliot’s Bible did much more than bring the Gospel to the pagan natives who were worshiping creation rather than the Creator… it gave them literacy, as they did not have a written language of their own until this Bible was printed for them.

The main reason why there were no English language Bibles printed in America until the late 1700’s, is because they were more cheaply and easily imported from England up until the embargo of the Revolutionary War. But the kind of Bible John Eliot needed for his missionary outreach to the native American “Indians” was certainly not to be found in England, or anywhere else. It had to be created on the spot. Eliot recognized that one of the main reasons why the native Americans were considered “primitive” by European settlers, is that they did not have a written alphabet of their own. They communicated almost exclusively through spoken language, and what little writing they did was in very limited pictorial images, more like Egyptian hieroglyphics than that of any functional alphabetical language like those of Europe or Asia or Africa.

Clearly the Word of God was something these people needed if they were to stop worshiping creation and false gods, and learn to worship the true Creator… but God’s Word could not realistically be translated effectively into their primitive pictorial drawings. So Eliot found a wonderful solution: he would give the native Americans the gift of God’s Word and also give them the gift of true literacy. He agreed to learn their spoken language, and they agreed to learn the Western world’s phonetic alphabet (how to pronounce words made up of character symbols like A, B, C, D, E, etc.) Eliot then translated the Bible into their native Algonquin tongue, phonetically using our alphabet! This way, the natives did not really even need to learn how to speak English, and they could still have a Bible that they could READ. In fact, they could go on to use their newly learned alphabet to write other books of their own, if they so desired, and build their culture as the other nations of the world had done. What a wonderful gift!

These Eliot Algonquin “Indian” Language Bible leaves remain one of the most rare and historically important artifacts of our American heritage. They are also among the earliest of all American printings, and the very first Bible printed in this hemisphere. Leaves from the Eliot Bible have sold for well over $3,000 each in recent months. We have fewer than a dozen leaves in stock. Each leaf comes with a beautiful Certificate of Authenticity. They measure approximately 7 to 8 inches tall by almost 6 inches wide, and they were printed on 100% rag cotton linen sheet, not wood-pulp paper like books today, so they remain in excellent condition… even after nearly 350 years. Each leaf is a unique piece of ancient artwork, carefully produced one-at-a-time, using a very rare early American movable-type press. Imagine… owning a leaf from the first Bible printed in the “New World”: The Eliot Bible.

Sadly, the many tribes that make up the diverse people-group that is collectively referred to today as “Native Americans” have for centuries continued to exhibit a stronger resistance to the Gospel and the “White Man’s God” than perhaps any other culture in the world. The result has been that the Native American Indians today have a higher rate of alcoholism, drug addiction, gambling-addiction, poverty, and suicide than any other culture in the world. In this we see clearly demonstrated, the multi-generational wages of rejecting the Gospel.

Many natives, however, did receive the Gospel through John Eliot’s Bible. In learning the concept of “written language”, and in learning the message of salvation in the written scriptures, many natives found their lives enriched beyond measure both spiritually and intellectually. More than a century later, Thomas Jefferson would make his own attempt to reach the native Americans by publishing “The Morals of Jesus”, a collection of Christ’s parables designed to communicate the core message of the Gospel to the natives.

Today, we see a liberal “revisionist history” being popularized regarding the evangelical outreach of the 1600’s and 1700’s to the native Americans. Through highly inaccurate story telling, such as that of Disney’s seemingly innocent animated movie “Pocahontas”, we see a story of early American settlers abandoning their Christian beliefs, and embracing the pagan nature-worship of the native Americans, in a politically correct display of multicultural unity! Of course nothing could be further from the truth, and that is quite the opposite of what actually happened. We can only assume that the film’s producers must have decided that a more true-to-life tale of Pocahontas rejecting her pagan traditions and accepting the Gospel brought to her through John Smith and others, though later dying in England of Syphilis, would not have made as nice a movie for the children!

View our advice on FRAMING for Bible Leaves.