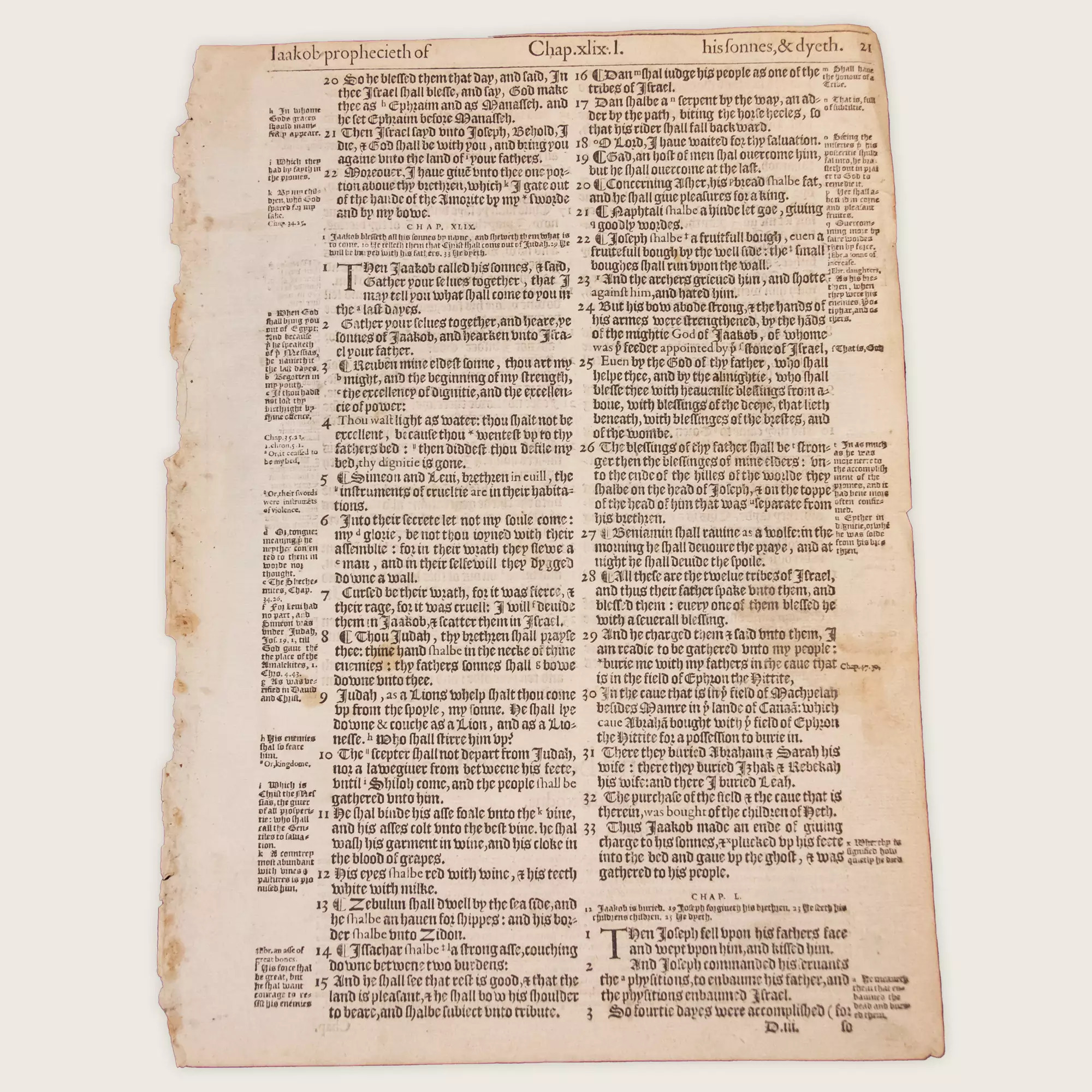 A leaf from the First Edition of a large “pulpit folio” sized printing of the famous Geneva Bible. These leaves are over 430 years old. If you love the history and significance of the Geneva Bible, but wish that you could get a Geneva leaf that is really BIG (like our most popular 1611 King James First Edition Leaves), this is the leaf you seek. This is the first Geneva Bible printed specifically for the church pulpit; a grand display piece nearly twice the size of all our other Geneva Bible leaves. They measure approximately 13 inches tall by 9 to 10 inches wide. Each leaf comes with a beautiful Certificate of Authenticity.

The Geneva Bible (also known as the “Breeches” Bible) was the Bible of the Protestant Reformation. It was originally produced in 1560, more than 50 years before the King James Bible, and it remained the most popular English language Bible among the people until decades after the introduction of the King James Bible. Whether framed and displayed in your home, or given as a wonderfully unique gift: it is sure to draw attention.

The Geneva Bible was first printed in Geneva, Switzerland, by refugees from England, fleeing the persecution of Protestants by Roman Catholic Queen “Bloody” Mary. Many copies were smuggled back into England at great personal risk. In later years, when Protestant-friendly Queen Elizabeth took the throne, printing of the Geneva Bible moved back to England. The Geneva Bible was produced by John Calvin, John Knox, Myles Coverdale, John Foxe, and other Reformers. It is the version that William Shakespeare quotes from hundreds of times in his plays, and the first English Bible to offer plain roman-style type in some of its early printings.

The Geneva Bible was the first Bible taken to America, brought over on the Mayflower… it is the Bible upon which early America and its government was founded (certainly not the King’s of England’s Bible!) The Geneva Bible was also the first English Bible to break the chapters of scripture into numbered verses, and it was the first true “Study Bible” offering extensive commentary notes in the margins. It was so accurate and popular, that a half-century later, when the King James Bible came out… it retained more than 90% of the exact wording of the Geneva Bible.

These leaves were printed on 100% rag cotton linen sheet, not wood-pulp paper like books today, so they remain in excellent condition… even after over 400 years. Each leaf is a unique piece of ancient artwork, carefully produced one-at-a-time using a movable-type press, and later bound together into whole Bibles. These genuine original antiquities are very rare and precious pieces of our history and our Christian heritage. We offer them for considerably less than the $1,000 each (!) that they sold for on “The 700 Club” TV Broadcasts in the late 1990’s. Imagine… having a favorite passage of scripture from the First edition of the huge Pulpit Folio printing of the Bible of the Pilgrims & Puritans: The Geneva Bible.