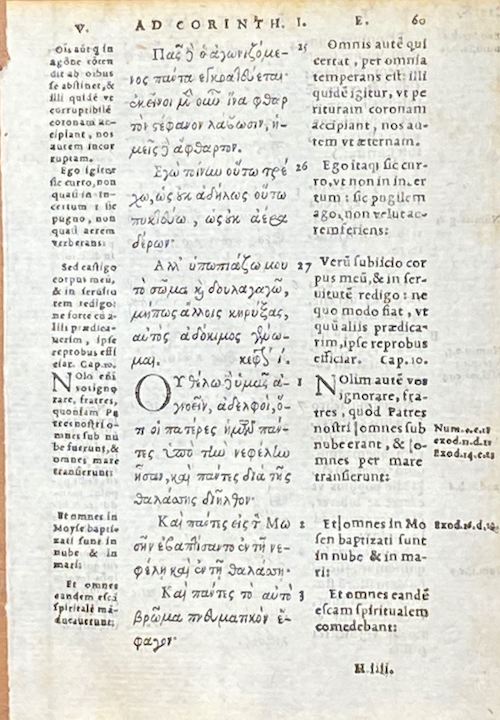 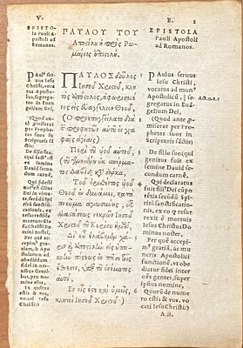 To our knowledge, these extremely historically important leaves have never been offered for sale by anyone at any time, and every collector of Bible leaves will surely want one.

We have secured a fragment of the 1551 “Latin-Greek-Latin” New Testament of Erasmus, published by Robert “Stephanus” Estienne. One of the most important books ever printed; it is the first printed scripture with modern verse divisions!

This unspeakably rare printing is the original source of the “numbered verses” we see in all our Bibles today, which appeared in English for the first time in Geneva Bibles, printed less than a decade after this 1551 edition.

Printed in three parallel columns, we see above the first column a “V.” indicating the ancient Latin Vulgate, and the middle column contains the accurate Greek version of Erasmus, and the third column has an “E.” atop it indicating the new and more accurate Latin version of Erasmus. This critically important edition showed in easily comparable parallel columns, the flaws and corruption of Roman Catholic church’s ancient Latin Vulgate, when considered in light of the original Biblical Greek right next to it… and for those educated to read Latin but not Greek, Erasmus provided a more accurate rendering of the scripture in Latin right next to that, so that they too could appreciate the difference, and read an accurate version of God’s Word.

This exposed the corrupted version in popular use, while simultaneously offering a faithful and accurate version which was then used to translate the scriptures into English and other European languages. The Greek and Latin content had first been published by Erasmus in 1516, (a publication that helped birth the Protestant Reformation), however this edition, for the first time, introduced an extra feature that every reader of God’s Word uses today. In order to assist in comparative study of the versions, the scriptures were for the first time ever, divided by the publisher, Stephanus, into numbered verses… a feature so extremely popular that it was carried forward into nearly all Bibles printed after that point.

Anyone who collects Bible leaves and appreciates the history of the transmission of God’s Word will certainly celebrate with us that this 1551 first printing of scripture with modern verse divisions is finally, for the first time, available by-the-leaf! The importance of this cannot be understated, as this milestone of history should be part of every collection of Bible leaves.

Arguably, these leaves might sell for $1,000 each or more… but we are making them available today for just $195 each with FREE Fed Ex Air shipping!